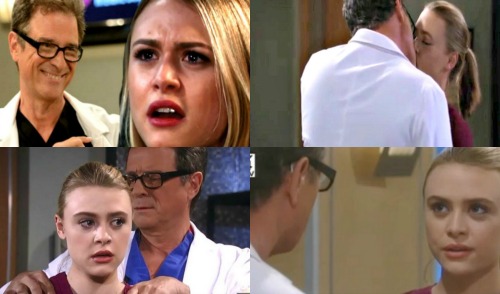 General Hospital (GH) spoilers tease that Kiki (Haley Erin) will struggle with what to do next. She freaked when Dr. Bensch (James DePaiva) gave her a shoulder massage, so she switched to the night shift to avoid him. Unfortunately, even that wasn’t enough to avoid the creepy doc. Dr. Bensch was relentless in his efforts to pursue Kiki and it all culminated in a shocking kiss.

Naturally, Kiki pushed Dr. Bensch away and called him disgusting. She couldn’t believe he’d abuse his position of power like that. Kiki thought Dr. Bensch saw true potential in her, but now she feels like he just wanted sex. The poor girl was a mess when she ducked in a room to crumble privately.

Nevertheless, Kiki will have to find a way to deal with all this. Once she processes what happened, Kiki can form a plan. Will she report Dr. Bensch to Monica (Leslie Charleson) or at least share the news with someone close to her?

Of course, General Hospital spoilers say Dr. Bensch may do some strategizing as well. Now that he’s been shot down, he could seek revenge. This could go beyond making life difficult for Kiki at GH. We could be talking about total career sabotage here.

Since only Dr. Bensch and Kiki were in that office, it’ll be his word against hers. During the shoulder massage we mentioned, Kiki stared at all Dr. Bensch’s degrees and awards on the wall. That may have been a hint about the trouble Kiki will run into. Perhaps she was thinking about how no one would believe her. That could definitely be the case if Kiki tells someone who respects Dr. Bensch.

To take this a step further, Dr. Bensch could even accuse Kiki of making moves on HIM. He might try to get her thrown out of GH’s program and completely derail her dreams. If Kiki keeps quiet initially, that would give Dr. Bensch an opportunity to twist the story. He could take precautions and spread the word before Kiki has a chance.

Tweets by Celeb_Temple
Celebrities Temple © 2021
Back To Top